It is a week since I have written and I always am disappointed if it is over a week between letters from you, and I suppose you are the same. So I will say that I am well as usual. Yours of the 13th bringing the news of your hearing from Geer was received. I was glad that he has paid that note. I hope you have taken fifty of it instead of selling a fifty dollar bond to send to me as I directed. If you have not sent that money to me yet, I guess you needn’t for it is believed here now that we shall be paid by the 10th or 12th of April. The money is said to be in St. Louis to pay this Army and I can get along until then. I shouldn’t be much surprised if I was in Trivoli yet by the 1st of May. It’s only guess work however. I suppose you have not heard from our prospective small Fontaine lately as you have said nothing about it lately in your letters.

I have not heard from home in a long time—not since the first of winter. I believe Russel was to go to Saratoga to see about the business. I have not heard whether he went or no. I was over to Col. [Hans] Mattson’s house the other evening and had a game of whist. Mrs. Mattson is a very intelligent, fine lady. Mrs. [Everett W.] Foster is also but not quite so heavy on the intelligent. She is quite fleshy.

I am quite anxious to see our little niece. She must be a pretty one—red and black commingling. You are mistaken about me not liking children. I am very fond of them (not for victuals). The dear little chicks—they are so nice and cunning. But we won’t trouble ourselves about children for we will have a very large family yet. And if we don’t, it won’t be our fault so we won’t fret any way. I care more for your love than anything else. And while I have that with your confidence, I am well satisfied.

I don’t understand about Frank’s Savannah trade. Thought he was out of the service. How could he go into trade while in the service?  Permits are no very big thing. I can get one here for two thousand a month if I desire it. An officer or soldier who has been in three years and honorably discharged can get one anytime almost. I could ship produce down here and sell and make a very nice thing but I am tired of being away from you and I am going to be with you if it’s only for two months.

I am ever yours, — Isaac Taylor 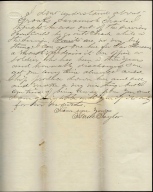 Back to Isaac Taylor Letters

Saving history one letter at a time.

Saving history one letter at a time

by Charles A. Frey

The Civil War Letters of Will Dunn

The Letters of Rufus Melvin Graham, drummer for the 50th Mass. Vols.
The Civil War Letters of Benjamin Curtis Lincoln while serving in the 39th Massachusetts Volunteers
"Though distant lands between us be"

"Tell her to keep good heart"

The Origin of Bluemont Central College

"May Heaven Protect You"

Lt. Commander in the US Navy during the Civil War

Fighting with the Irish Brigade during the Peninsula Campaign

"Till this unholy rebellion is crushed"

"I Go With Good Courage"

"This is a dreadful war"

The Diary of George W. Shue

No Cause to Blush

This is Indeed A Singular War